Mary Ann Peltier Rigney was a friend of mine growing up in Stillwater, Minnesota. She was always a very positive person, but I never noticed it as much as when she was diagnosed with ovarian cancer in November of 2008. I got together with her February 5, 2015 for an interview at her home. I asked how she had first discovered the cancer. She told me she was working in a chiropractic office at the time, and had to lay flat on her stomach on the floor one day to reach under a shelf to adjust the stereo system. Except that she couldn’t lay flat. She said it felt like she was lying on an inflated balloon. She didn’t have any pain, but she knew something was wrong. 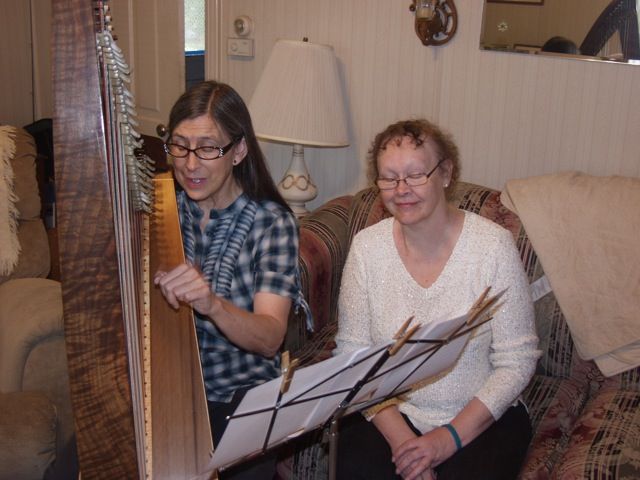 I went to school with Mary Ann at St. Mike’s. She was two years behind me, so I didn’t spend a lot of time with her then, but as we got older, we got to know each other well, playing guitars in teen choir at the church, and appearing in plays and choral reading in high school. She was always the girl with the beaming smile, and ever-present positive attitude. And none of that changed when her life changed forever in 2008.

In retrospect, she says she had the “silent symptoms,” but didn’t realize it at the time. She was breathless when she bent over, she had fatigue, felt bloated, and had lost weight. But she was in Weight Watchers, so she just chalked it all up to that. But after that experience of not being able to lie flat on the floor, she went straight to the doctor. After looking at an X-ray, and examining her, his face went white and he said yes, there was a mass there. An ultra sound and CAT scan quickly followed, and the specialist confirmed it was ovarian cancer. At first, she was in shock. “I felt surreal, like this isn’t right. I’m healthy, I’ve never had a bad cell in my life.”

Mary Ann’s family is very important to her, and she immediately shared the news with them, even before it was confirmed. First she told her husband, then their two sons, aged 18 and 21, who were both living at home. I asked how she told them. She said, “Dr. Williams thinks I have ovarian cancer.” Then she shared, “We were all sobbing, but I wanted to be strong for them, so I said, ‘OK you guys. I don’t think you know your mom has some stubborn cuss in  her, and I’m just going to beat this crap.’” It did the trick, and they all laughed through their tears. Next stop was her parents’ house, to give them the news.

After the date for her surgery was set up, she had a heart-to-heart talk with her husband, and they both decided,  “It’s time to pull up our bootstrings and hit it head on... go for the gusto.” The surgery was extensive, removing her ovaries as well as fallopian tubes,  appendix, omentum (the layer of fat that covers your abdomen), and a lymph node. (She had had her uterus removed years earlier).

She was home by Thanksgiving, and started chemo ten days after Christmas. She had “double” chemo, receiving IVs of both Cisplatin and Taxol. There were also various other drugs taken on a complicated strict schedule; pre-meds for the chemo, and others to combat nausea, insomnia, and anxiety.

Throughout the six months of treatment, her family and friends played a huge part. Her mother, father, or a friend drove her to Woodbury. They would sit with her through hours of either chemo IV’s, or fluid IV’s. I asked her how long it took for the exhaustion that comes with chemo to set in. She answered, “It comes on right away.  You feel drugged. You lose your appetite.  You don’t crave food.”

She told me, “I lost my hair within two weeks of starting chemo. My doctor told me you will lose your hair before your next session, and that it will be emotional.  But it’s the only thing that you have control over. A lot of women shave it off, some don’t.  The minute it started coming out, it came out in clumps. My friend Sue shaved my hair off. I had her come to the house. I decided, when it started coming out, I’m not going to look scraggly....  I was really teary.”

In the next breath, in typical Mary Ann style, she said, “I looked in the mirror, and thought, ‘I don’t look so bad bald.’  All of a sudden I turned and I got a glimpse in my peripheral vision, and I went ‘Oh my gosh, Billy my brother and I look alike!  (He’s bald). Billy needs to put on earrings, and we’ll match!’ My boys shaved their heads the next day - they shaved each others - and my brother Billy, and some of the firemen.” Several of Mary Ann’s brothers are firefighters, as was her dad. “It was the least of my worries. My hair is nothing to worry about. I am who I am without my hair.”

“I told Mom going over to my last treatment, I felt so bad, I said if I had to do any more after today, I was hitting rock bottom. I couldn’t stand it. Pure exhaustion. The thought of it... all the drugs, it does a whole number on your head.”  After a nine day cycle of chemo, she got two weeks off, before starting it all over again. How did she make it through six months of this? “I told the boys I had stubborn cuss in me, and I guess that’s what’s kept me going.....my family, my boys, my husband, my parents, and a lot of prayer, and a lot of friends’ support.  People from all over were putting me on prayer lists .... I don’t know ....I just think laughter, good attitude and my family and friends’ support has kind of kept me on the road.  Don’t get me wrong, I’ve had some really low days - everybody does, even without cancer or other issues.”

After the six months of chemo, she had a CAT scan at Woodwinds Hospital. Then you wait and wait, for a week. I asked her what she felt like all that week. “A nervous wreck,” she answered. “Actually, as the days go on, you get more nervous.  The fact is the radiologist has to read it, they compare it to the last one.  It’s faxed to the doctor, and the nurse can’t tell you till the doctor has looked at it.”

Finally the phone rang, “I have good news! For now, I have good news.  Right now, it looks like you’re cancer-free, it’s in remission.” Mary Ann said, “I got off the phone, and it was another surreal. I’m supposed to be happy. Why aren’t I super-excited?  Later on I was happy.  Totally relieved.” Her exhaustion was so extreme, she had to wait a year and a half to go back to work at the chiropractic office part time. Then in 2010, her husband left her. The nurses told her this was not an uncommon occurrence, unfortunately.

Every three to six months she got tested, and everything was fine, until she got the call she dreaded, two years after going into remission. The cancer was back. “I couldn’t believe it,” she said. She had only been back at work for a few months.

She told me the doctors were “always trying to take the positive route.  I think that’s another good thing for me, I’ve always had doctors and nurses that have to tell you bad stuff, but we’re going to do this particular drug and they explain it really carefully, what the major side effects are, but you could have others you know.”

She had a second surgery, removing her spleen, the tip of her pancreas, a sliver of the bottom of her liver, and a couple lymph nodes. She’s been on different types of chemo ever since. She lives with her mom and dad now. I’ve also known them for years, and it’s obvious she got her loving and positive attitude from them! She hasn’t been able to return to work again.

Besides the sickness and exhaustion, she’s suffered many side effects from chemo, including peripheral neuropathy (numbness in extremities) and ringing in her ears. Over the years, she’s lost and re-grown her hair three times. The first time, she said, “It came back kinky, curly, and gray. The second time, it came back gray also.  The third time, it’s coming back dark brown.  I’ve never had this dark of hair.  So I’m getting younger!” She laughs her beautiful laugh for me again.

I told Mary Ann, “A lot of people are inspired by you. Because you’re so positive.  I don’t know how you can keep that positive attitude.”

She replied, “I have a nice home, and everybody loves me, that sounds terrible, but I have good support, (she laughs out loud), and I love everybody.  You can sit around and cry and mope, but then that’ll make you sicker. They say to stay away from stress.  If you’re always  going to be negative, then that’s going to affect your health and so I try to be positive. I’m a goofball and my boys tell me that and I tell them I have chemo brain and that’s why I’m that way and they say Mom, you can’t blame it on the drugs because you were forgetful before you got cancer (She laughs again). So they don’t cut me any slack either.”

I asked her, “You never thought ‘why me’ with the cancer?”

She told me, “No, I guess I really just never had time to do that, or that’s just not me maybe?”

As I started writing Mary Ann’s song, I thought about how she’s always liked dragonflies. Out of curiosity, I started reading up on these amazing beings. Unlike other flying insects, dragonflies are very agile and adaptable, able to fly in all six directions - forward, backward, up, down, and to either side. They can also change directions suddenly. Though their wings appear to be paper-thin, they are surprisingly powerful, capable of migrating across oceans. The more time I spend with Mary Ann, the more I realize she has become, now more than ever, like her beloved dragonfly - agile, adaptable, resilient, strong, and powerful. Thus was born the title of her song, Dragonfly. 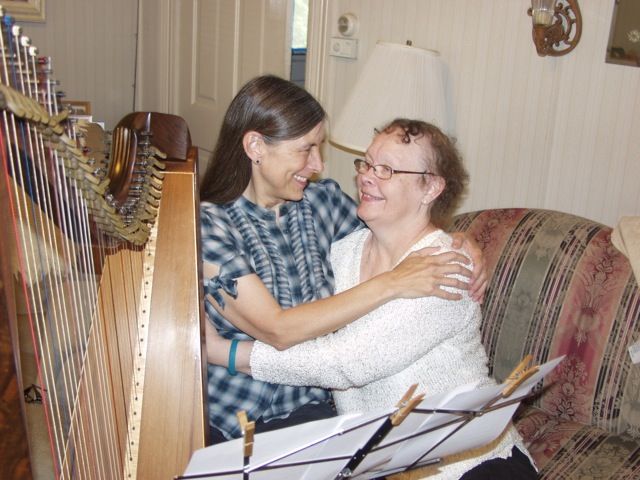 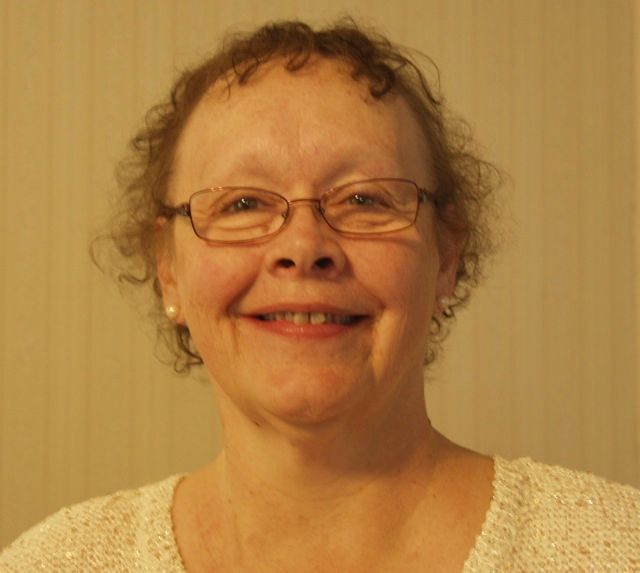 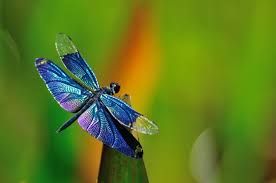